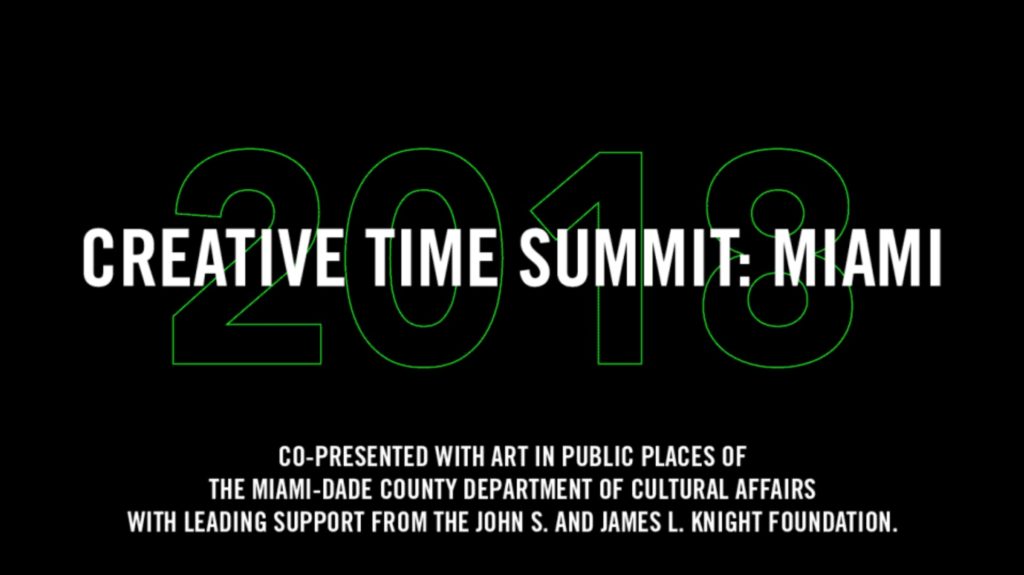 The 11th Creative Time Summit, On Archipelagoes and Other Imaginaries: Collective Strategies to Inhabit the World, will take place in Miami, FL, from November 1-3. The Summit is co-presented with Art in Public Places of the Miami-Dade County Department of Cultural Affairs, with leading support from the John S. and James L. Knight Foundation.

American poet Fred Moten defines ‘coalition’ as the recognition that practices of dispossession, whether they are cultural, political, environmental, or economical, whether they are occurring in our immediate environment or at a far distance, affects us all.* To that extent, ‘coalition’ is the realization of an unavoidable connectedness: we are all in this together.

As a platform for such connectedness, the Creative Time Summit 2018 gathers artists, thinkers, activists, and cultural producers whose practices stimulate others into emancipatory projects formulated under the desire for planetary thinking. Using the archipelago as a framework for questioning colonial and postcolonial ways of seeing and thinking, we will delve into Miami’s historical connection to the Caribbean and, by extension, to Latin America and the entire world. Namely, we will shed light onto common, and at time contradicting narratives of regions defined by international migrations and depopulation, queer cultures, indigenous ways of being, tourism industries, and ecological disasters, by engaging with de-colonial dialogues and new social imaginaries.

This year commemorates a milestone in the history of international coalitions and solidarity: half a century later, we are reminded of the resilience of the struggles of 1968 in the Americas and around the world. Today, artists, activists, students, dreamers and community organizers are actively challenging their governments to establish a different relationship with the environment, while refusing the enclosure of land, wealth, and culture, and collectively inventing alternative social institutions.

While remaining critical of current economic and political power structures imbued with renewed neo-colonial aspirations, we will collectively grapple with the possibilities that art and culture offer and respond to current political struggles and reimaginings of dissent. We will build upon the experiences of each of our participants, facilitating exchanges and collaborations that we envision will have a lasting effect upon public opinion long after the Summit’s closing remarks. Ultimately, the 2018 Summit aims to reflect upon the contingencies of our time, urging all of us to take an active role as agents bringing about change and social justice.

The Creative Time Summit “On Archipelagos and Other Imaginaries” is curated by Elvira Dyangani Ose in collaboration with Corina L. Apostol.